Just how often do female entrepreneurs receive the venture capital funding they need?

Securing funding has always been one of the biggest challenges for female entrepreneurs. According to a report by the National Women’s Business Council, women tend to start businesses with around 50% less capital than their male counterparts.

In 1999, 5% of venture capital deals went to a startup with a woman on the executive team. It’s taken nearly 20 years to increase that amount to 18%.

How much have VC funding stats changed in the past few years and do women have better access to funding?

Fortune magazine recently published some interesting stats on VC deals by gender as well as value. The results are unfortunately nothing to shout about.

While male-owned businesses received a whopping $58.2 billion in funding in 2016, women received a mere $1.46 billion.

Male entrepreneurs are still receiving far more venture capital deals than females and the value of those deals are also much higher.

The below graphs show that female founders have a better chance of securing funding deals when they partner with a male founder but even then, the stats are still not as high as male only businesses. 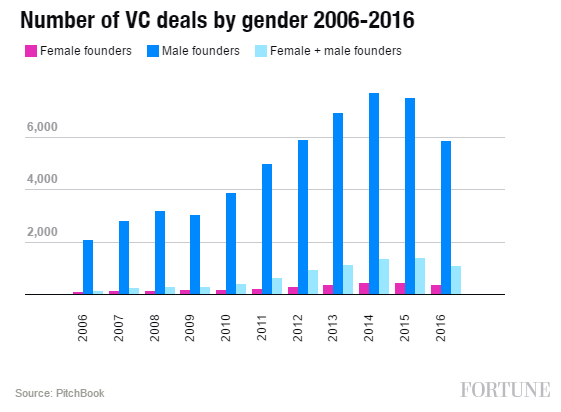 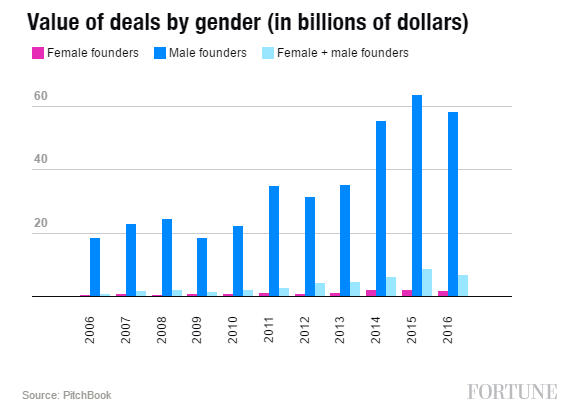 While it’s great to see that mixed-gender founding teams are on the rise and that they’re successfully securing funding isn’t it time that female founders receive more VC funding when starting their own businesses?

A study by Pitchbook showed that start-ups with female founders in the consumer goods and recreation and pharmaceuticals and biotechnology sectors received the most funding in 2016.

Even though 2016 was a tough year for female entrepreneurs there were a number of success stories. Here are just a few of the women who managed to secure VC funding in 2016:

Fundraising Secrets from "the Crowdsourceress" Alex Daly
Next