The Atlanta visit of the National Womens Business Council focused on research and understanding the success factors of women entrepreneurs and, in particular, black women entrepreneurs. Georgia leads the nation in the growth of women-led businesses. 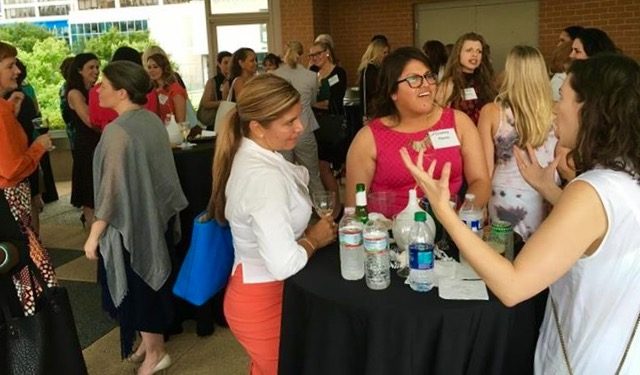 “We have come to listen,” boomed the big, generous voice of Obama-appointed National Women’s Business Council leader Carla Harris. She is a celebrated Harvard alumn who is also Vice Chairman of Global Wealth Management, Managing Director, and Senior Client Advisor at Morgan Stanley.

Her commanding tones and welcoming smile bookended the three day NWBC tour of Atlanta. She was flanked by the energetic and newly appointed executive director Esther Morales, coming to the NWBC from the Office of the First Lady.

A number of national council members travelled to Atlanta on this listening tour, including women entrepreneurs like Anne D. Shybunko-Moore of GSE and luminaries including Jen Eeale, CEO of the National Association of Women Business Owners, and Pamela Prince Eason, the President & CEO of Women’s Business Enterprise National Council, and Sandy Welfare, the Executive Director of Women in Technology.

Locally, Maryam Alavi, Ph.D and Dean of Scheller School of Business at Georgia Tech; Theia Washington Smith, executive director of the City of Atlanta Women’s Entrepreneurship Initiative, and Jen Bonnett, General Manager of the Advanced Technology Development Center (ATDC) at Georgia Tech were much in view as hosts and helpers of a community-wide conversation that ranged from race in women’s entrepreneurship to access to capital. Startup Chicks, the Metro Atlanta Chamber, and Atlanta Tech Village shared some of the costs to host local groups of women entrepreneurs as the National Women’s Business Council posse traveled across the city, dropping in at Georgia Tech, the Metro Atlanta Chamber, and the Women’s Entrepreneurship Initiative. The focus was the jaw-dropping growth of women entrepreneurs in Georgia. Our state leads the country in the growth of black women entrepreneurs, and women’s entrepreneurship more generally. “Atlanta is a trail-blazing city,” said Harris, “and that’s why we’re here.”

Casual conversation in the crowd ranged from excitement over the new BIG incubator by Katherine Finney, to appreciation for the new Startup Runway seed capital event series for women and minorities, to pride in the Atlanta’s Mayor and city council for creating a visible, living symbol in the Women’s Entrepreneurship Initiative.

Stay tuned to NWBC’s research section for more coming out on that this September. “Those that don’t get it, hug the data,” quips Harris. “So we make sure they have the data.”

In conclusion, here’s a quote from America’s first woman millionaire, Madame CJ Walker, whose museum in downtown Atlanta is a draw and an inspiration to entrepreneurs to this day:

With support from each other, focused through intense lenses like the National Women’s Business Council, the ground women entrepreneurs are building our factories on just keeps growing.

*Thanks to Stacey Sutton for the header image in this article.