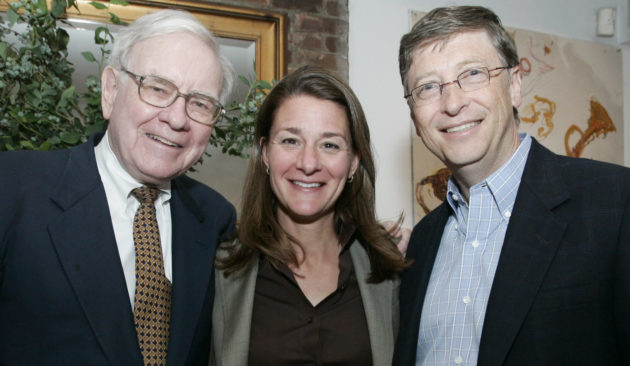 In a letter last December, Warren Buffett, one of the richest people in the world with a personal fortune around $85 billion, urged his even richer friends Bill and Melinda Gates to share “how the two of you measure yourselves and how you’d like the final scorecard to read.”

It’s a great question, and not just for the world’s richest self-made success stories. Buffett suggested that the Gateses, the richest couple in the world, go ahead and answer the question in a public way. Bill and Melinda Gates top the Forbes list of billionaires, with Bill’s personal fortune in the neighborhood of $95 billion. They’re also entrusted with a significant portion of Buffett’s fortune, which he pledged to the Gates Foundation. Bill and Melinda Gates call it, “the biggest single gift anyone ever gave anybody for anything.” It doubled the Gates Foundation’s resources.

The couple wrote back, “You can create all kinds of new tools, but if you’re not moving toward equality, you’re not really changing the world. You’re just rearranging it.”

The Gateses are united in one belief

“Melinda and I first started following these childhood mortality numbers more than 20 years ago,” Bill writes. “As you know, we’d taken a trip to Africa to see the wildlife, and we were startled by the poverty. When we came back, we began reading about what we’d seen. It blew our minds that millions of children in Africa were dying from diarrhea, pneumonia, and malaria. Kids in rich countries don’t die from these things. The children in Africa were dying because they were poor. To us, it was the most unjust thing in the world.”

According to its 2017 annual letter, the Gates Foundation has helped save 122 million children’s lives so far. Ultimately, they’d like to end the needless deaths of newborns and children worldwide. Interestingly, their empathy for children dying of preventable, everyday issues like diarrhea has opened their pocketbooks and their minds to what creates pain, suffering, and death, period.

They discovered childhood mortality is a symptom of other issues

Children’s deaths are often a result of lack of birth control, gender inequality, and poor women’s health. Melinda wrote, “Virtually all advances in society–nutrition, education, access to contraceptives, gender equity, economic growth–show up as gains in the childhood mortality chart, and every gain in this chart shows up in gains for society.”

Bill added, “When women in developing countries space their births by at least three years, their babies are almost twice as likely to reach their first birthday. Over time, the ability of women to use contraceptives and space their pregnancies will become one of the largest contributors in cutting childhood deaths.” In fact, the Gates Foundation reports “no country in the last 50 years has emerged from poverty without expanding access to contraceptives.”

“Poverty is sexist,” Bill writes. “The poorer the society, the less power women have. Men decide if a woman is allowed to go outside, talk to other women, earn income. Men decide if it’s acceptable to strike a woman. The male dominance in the poorest societies is mind-blowing.”

He continues, “When women have the same opportunities as men, families and societies thrive. Obviously, gender equity unleashes women’s potential, but it also unleashes men’s potential. It frees them to work as partners with women, so they can get the benefits of a woman’s intelligence, toughness, and creativity instead of wasting their energy trying to suppress those gifts.”

“The future will surprise the pessimists”

Melinda and Bill closed their letter to Warren with strong affirmations of his optimism, and theirs. They point out that extreme poverty worldwide has been almost cut in half in the last few years, even though most people think it’s worse–perhaps because the media makes it seem more present.

A lot of people feel the world is getting more fragmented, and we all can point to examples of that. But if you look along a timeline, the periods of fragmentation often come when society is digesting its new diversity. The larger historical trends are toward greater inclusion and caring.

The future will surprise the pessimists.

See the full letter on GatesNotes.

This article was first published in Inc. Magazine.