6 Ways Awesome Speakers Own the Room

The incredible power and persuasiveness of a speaker who owns the room is hard to describe and impossible to forget. Here are the essentials of what I've learned from 20 years of focusing on the art of speaking.

I used to feel that I disappeared into the wallpaper, which is why I’ve studied this myself. When I was in high school, I won first place at the state level for extemporaneous speaking. I gave the valedictorian address. In college, I competed nationally in debate. But when I became an entrepreneur, speaking got real for the first time. This game has real winners and losers; it’s not high school anymore. It took time, but I know how to own a room now.

The hardest lesson for me to learn was how to dress. I have always wanted to show up as myself—clean, calm, caring, and present. In most rooms, this is necessary, of course, but not nearly sufficient to own the room.

In addition to these basics, you have to come clad in how that particular audience sees power and authority. When I speak in venture capital circles, that’s navy suiting. When I speak in tech groups, I can add some khaki or careful denim.

The essential rule is to think about your audience and how they see power. Dress to their expectations to minimize their visual debate over whether you deserve their attention today

I’m as articulate as the next person. Yet I have made the mistake of relying on that instead of hard rehearsal. In Austin recently, my tech public relations firm was sponsoring a Vistage conference. I caught a few words of the keynote speech from a well-known and highly regarded entrepreneur with several high-stakes exits under his belt. It was precisely the same phrasing and pausing as it had been the year before. And the year before that. And, yes, the year before that.

I remember the first time I heard him: I was blown away. He’s still delivering that same, precise experience of absolute excellence.

Rehearse. Don’t let your success rely on your mood or the moment.

Drilling eye contact is magical. I didn’t realize that I wasn’t connecting completely with my audience until I took a class at Speakeasy, a company that specializes in teaching executives how to connect with a room.

“Powerful communication comes from being authentically present, open and vulnerable in the moment,” says Scott Weiss, CEO. “There is no substitution for being present as yourself.”

That sounds nice, and I believe it. But so what? In practice what it means is, in a big room, to producing lingering eye contact. The secret is looking not just at or just over your audience—look at individuals in the room. Hold their eyes until they acknowledge your gaze. Let them see you, and let them know you see them seeing you. That creates an intimacy that bonds you with the audience in real time and in real action. 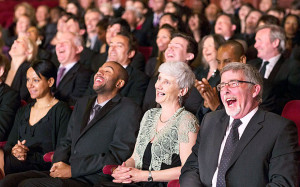 Audience members who see you seeing them are somehow more open to bringing you into their real life of activity—which means whatever you are asking of them has a better chance of getting done.

What I have also found is that when I, as the speaker, get real reactions from my audience on an individual level, I have a deeper joy in the moment. I know what I’m “doing up there” matters not just to someone, but to you.

You and I will always matter

Care more about the topic than you care about yourself. We all crave vulnerable, honest communications. Most executives can’t stop presenting their own agenda unless the topic is so profound they no longer care what you think of them—only what you do with the information. This is an intensely powerful place to present from.

You have to share a clear call to action to know if your time in front of that audience mattered. I am a child of the deep South. I grew up in an evangelical community in which every Sunday, I got to witness at least one Demosthenes work his world into a lather. Yet when I think of all those sweaty Sundays, attended by the tongues of angels and the choirs of celebrations, the actual outcomes often got a bit lost, pardon the pun.

It’s not that different for business speakers. You can care so much about the topic, yet fail to join it to a purpose you can measure. So when you are “at the pulpit,” be sure to connect your passion to a call to action.

Have a small and measurable action that anyone in your audience can do immediately to let you know that everyone not only understood but is activated. As a speaker, I assure you that you will gain in grace and power from having an audience that engages you not just in eye contact but also in action. 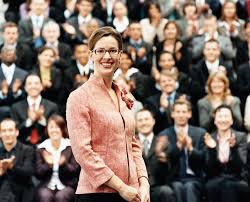 Every speaking course I have taken has stopped with the excitement or activation of the audience. It’s not over yet.

Stopping there, with getting the audience to do your bidding, is like not letting yourself snuggle after good sex. Who would do that?

When you have truly connected with an audience and asked them to jump into action for you, stay with them in their moment and see what they need from you in return. Be there for their dismount. If you own the room, you own the ramifications.

Find a corner of the room to share with those who were moved. You owe a great audience a great ending, and often for the most moved, that is a moment with you. Don’t fear this stage—it’s often where lives are changed. Owning the room is a privilege. One of the responsibilities it comes with is being there after the big moment. You’ll then be the speaker that gets invited back to bigger rooms by those very people you invested in at the end of the show.

5 Big Reasons Not to Hire for Culture Fit
Previous

Be featured in FemaleEntrepreneurs magazine
Next