So Atlanta Leads the Nation in Tech Gender Pay Gap–Now What?

Their top finding was the significant pay gap not between races, or even ages, but between genders. Atlanta took the" booby prize" as the worst city for a woman in technology to work--here are things we can do about it. 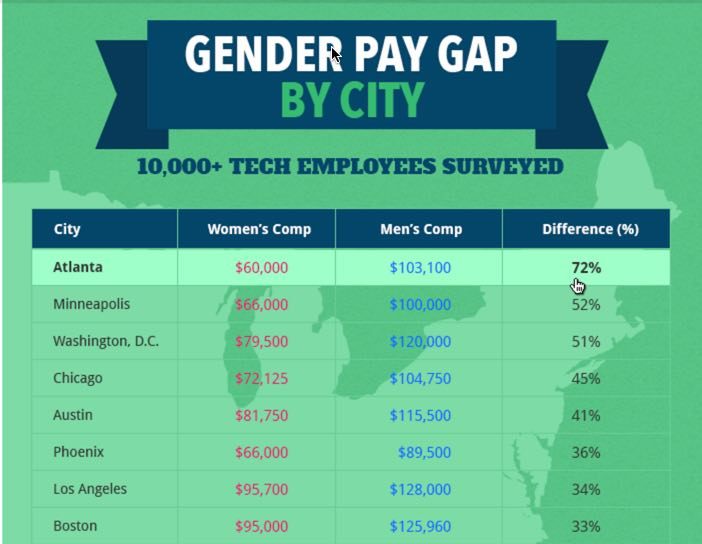 According to its study of 10,000 technology workers, salary comparison site Comparably just released its findings around the wage gap between genders, races and ages.

Atlanta took the booby prize as the worst city for a woman in technology to work, beating out Silicon Valley, Chicago, Austin, New York and other tech hubs for sheer gender bias.  Women working full time in tech in Atlanta earn about $43,000 a year less than men on average in the same role, with similar education, at similar ages.

It means Atlanta systematically pays women 72% less than guys in the industry, adjusted for education and role. The worst department of all? Finance.

Is Atlanta really this bad?

My first reaction to this information was to distrust Comparably and think–no way, not Atlanta. Not my  town. Not my tech community–I mean honestly, I love us, our entrepreneurs, and the businesses we all work so hard on. This pay gap stuff is so negative, such a joy kill, so messy . . . so impossible.

And yet–denial is famously the first stage of grief.

Now that I’m through to acceptance (I saw the study the day it came out and this post took me a while), here’s what we can do about it. This didn’t happen because of any one person or company, or even tech as an industry. It didn’t happen because of women, or because of men. This happened on a systemic level and we can change it with systems thinking, applied with discipline on a personal level:

As I reviewed the numbers–something my tummy didn’t enjoy one bit–one of the correlations that struck me most is that many of the cities with striking tech pay inequality –Atlanta, Austin, Chicago, Houston–are also the cities that boast the largestrates of women’s entrepreneurship. No need to overthink it–if you’re not being paid well in the office, it’s a huge incentive to practice your skills for yourself.

Let’s hope the Comparably study was horribly flawed and skewed.

But in the meantime, I’m not going to shred the message because I didn’t like it. Even if the gap in the Atlanta tech community is just half what they report it is, we can do better.

Atlanta is better than that.

I look forward to Comparably’s significantly revised figures soon, because I have no doubt that Atlanta is among top performing cities in tech on all cylinders–we’re just in the middle of a bit of a pivot. Bottomline, I know we are the team that will get it done and done right.  What are you going to do once you get past denial? The future is best predicted by those of us who intend to invent it–and that’s us, right here in Atlanta.

How Female Entrepreneurs Can Grow Their Businesses Online
Previous

Kathy Leake, CEO Qualia, Raised $14.35 Million. Here's What She Has To Share.
Next